We are pleased to present a guest post from Valerie Perlovskaya, a former Little in our mentoring program and camper at Camp Bob Waldorf. Valerie is a current scholarship recipient attending Cal State Los Angeles this fall. This summer, Valerie participated in a once-in-a-lifetime trip to Israel with Taglit Birthright. Although the trip was free, there are expenses associated with the travel that were generously covered by the Mogerman Birthright Scholarship. The Mogerman Birthright Scholarship, generously funded by longtime JBBBSLA Big Dennis Mogerman, is a $500 award open to current or former JBBBSLA Littles taking a Birthright trip. Each applicant must submit an application which is reviewed and approved by Dennis.

Valerie shares a beautiful recap of her delayed-and-abbreviated-due-to-COVID birthright trip as well as several photos that capture the beauty of Israel and the spirit of community on the trip.

Although my time in Israel was short-lived, I’m still immensely grateful for the experience. Initially, I planned to go on birthright in the summer of 2020, after getting a 4.0 GPA during the Spring semester. (Before this, I struggled with school and was actually on academic probation.) Unfortunately due to Covid sending the world into ‘Camp Quarantine,’ my trip ended up being delayed by two years, but it gave me more time to focus on school. As restrictions finally started to lift and Israel started allowing travel, I decided that my best bet was to apply for the June 2022 trip after I finished my Associate’s Degree at Valley College. As I will be attending CSULA in the fall for my Bachelor’s Degree, I felt I deserved to treat myself to an adventure and finally leave Los Angeles where I have lived my whole life. A few months before my trip, I found Hillel818 which is the Hillel that serves my area here in the San Fernando Valley. Coincidentally, they were going to host a Birthright trip consisting of college students not only my age but also from my area.

During the orientation, I recognized a few students I had interacted with at Hillel but many were new faces I was excited to meet. The timing was whirlwind; I had graduated on Tuesday and not even 12 hours later I was on a plane to Israel! 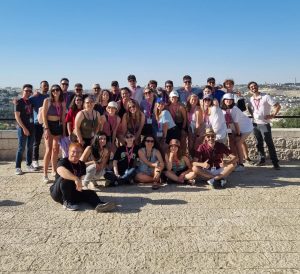 My group landed in Israel on Thursday. I was told this was unusual, but it was also really exciting as we would be spending two Shabbat in Israel. Fighting the jetlag, we went to a really beautiful view of Jerusalem and the Old City and participated in the Shehecheyanu ceremony as well as took our first group picture.

The next day, Friday, the bus took us from Jerusalem to Tel Aviv where we got to meet the eight Israeli soldiers who would be joining our group as participants. We got lunch at the Shuk (basically the coolest farmers market I’ve ever seen) and then we got to do something super unique — attend the Tel Aviv Pride Parade. Although I live in Los Angeles, this was my first pride parade and it was magical. 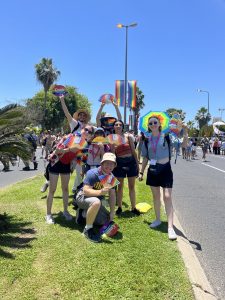 Since it was Friday, after the parade we were driven back to Jerusalem and we celebrated Shabbat at the Hotel. The next day we went to the park and the Israelis taught us some Hebrew in preparation for our night out. We spent the afternoon relaxing and getting to know each other until eventually the sun had set and we were off to go party at Mahane Yehuda.

Although I am 21, I had never been ‘clubbing’ or to a bar before, so I found it quite comforting to have a group of friends to spend my evening out and this new experience with. We didn’t drink all that much but the energy of everyone singing and dancing was intoxicating. I felt safe to let loose and dance with the crowd, having a great time taking in the nightlife.

Sunday was much more on the serious side of things. We visited Mount Hertzl, which I would liken to Arlington National Cemetery in the US. Mount Hertzl was stunning, we visited the graves of prime ministers and other prominent figures were buried as well as the military cemetery where IDF soldiers were buried. We walked around and visited different areas and were told a few of the stories behind the soldiers buried there. It was quite a shock to me seeing how young a majority of the soldiers were. 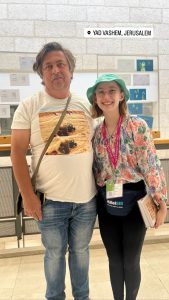 Afterward, we grabbed lunch in Jerusalem before heading over to Yad Vashem. My grandfather was a child during the Holocaust and it is very important to me to remember the past and educate myself about it. Personally, Yad Vashem was the highlight of my trip. I got to meet a family friend who works in the archives there and has known my mother since she was a teenager. The museum tour was almost three hours long and the time flew by so fast that if I get the chance to visit Israel again, I would spend three days at Yad Vashem alone.

Monday was our last day in Jerusalem. In the morning we visited the Old City. We got some coffee and snacks from Aroma Cafe (hands down, their coffee was way better than Starbucks) and explored the Jewish quarter of the Old City. Seeing everything built out of stone was so beautiful and you could tell there was so much history imbued in those stones. I would argue that architecture in America is pretty lame in comparison. 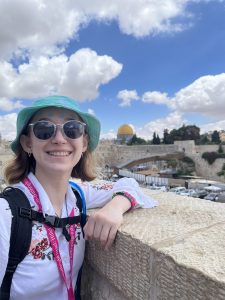 Our tour of the Old City ended at the Western Wall. What I did not expect was the energy and the overwhelming sense that my prayers and wishes were being heard when I came close to the wall. I cried and had never felt something so strong before and at that moment I understood why so many people find this site to be so powerful and meaningful. For lunch we returned to Mahane Yehuda, and compared to the bars and nightlife we saw on Saturday night, it was a stark contrast to the lively farmers market it was during the day.

In the afternoon we visited Lakiya, a Beduin city. We heard the story of a woman who defied cultural norms and chose to go to school. She forged her path, getting an education and becoming a nurse. At the time, women were not allowed to get an education past 6th grade so it was really interesting to hear her story of how she didn’t back down, and eventually, her actions led to a change in cultural norms in her community. I got most of my souvenirs from Lakiya, knowing I was supporting the women in that community made it worth it. (Can you spot Jey peeking out from behind me?) 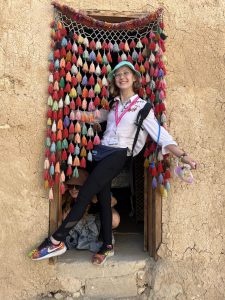 That evening we spent the night at the Beduin tents at Kfar Honokdim. I GOT TO RIDE A CAMEL which was super cool.

There were so many animals roaming the grounds, I got to pet some of the stray cats and saw peacocks all around. The Beduin tents reminded me a lot of camp and the summers I spent at Camp Bob Waldorf. While everyone was complaining about having to walk to the bathroom, I felt like I was right at home.

Unfortunately, after dinner, I wasn’t feeling well and was hoping it was just a cold as we were set to hike Masada and visit the Dead Sea the next morning. Sadly, it turned out to be Covid. I was given a ~private tent~ where I spent the night by myself and the next morning was taken back to Jerusalem to quarantine.

Luckily my isolation period ended on Saturday night, so I was able to fly back home to Los Angeles with my group. Unfortunately I missed out on a lot of the more active activities such as river rafting, rock climbing, and ATV riding, but I tried to make the most of my free time by making friendship bracelets for people in my group. Quite a few people in our group extended so the flight back was only 15 of us but even after five days away, we got right back to talking like we never missed a beat. 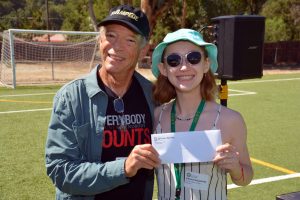 Although I missed half the trip, I’ve been in contact with people from my group and we already have plans to spend Shabbat together when a few more people return from their extensions. I am very grateful for the Mogerman Scholarship I received as it allowed me to not worry about my expenses and focus my energy on making connections with people and the experiences I was fortunate to do.

I would go back to Israel and do Birthright again if I could. The only thing I would change would be being more adamant about masking and packing a few extra COVID tests. With that being said, not even a pandemic could stop me from making friends even if I was stuck in a hotel room for half my trip.

To learn more about JBBBSLA’s College Access + Success program, please visit our scholarships page. We also encourage you to Make a Gift Today so we can continue to create impactful programs for students to help them achieve their academic dreams.

This site uses Akismet to reduce spam. Learn how your comment data is processed.